The island nation of Jamaica, with its white-sand beaches, crystal clear water bodies and serene locations, has been a popular destination for most weddings.

Couples who head to the island do not only get that ultimate summer wedding but also enjoy some of the unique Jamaican wedding traditions which they incorporate into their events.

So if you are planning a Jamaican wedding, here are the wedding traditions you need to know about: 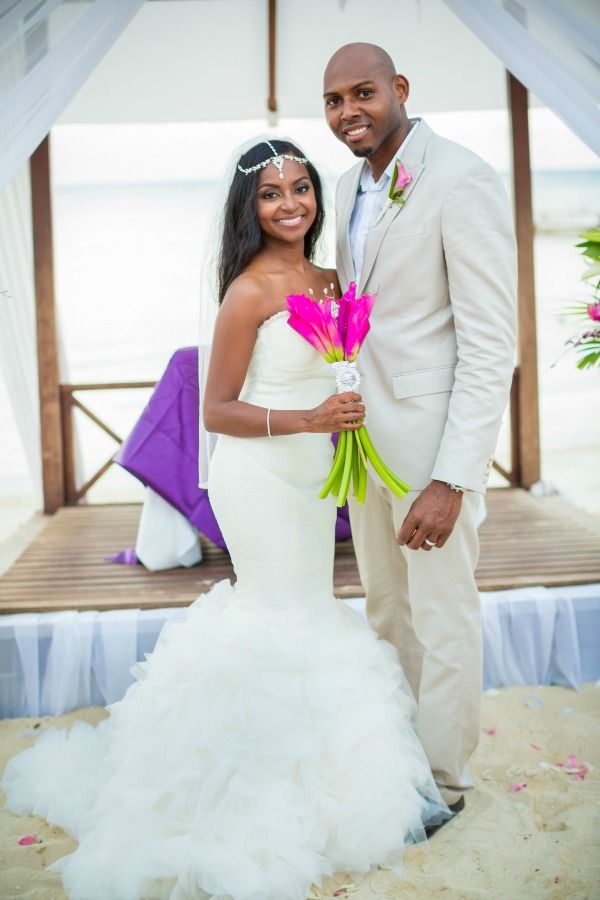 A wedding dress in Jamaica usually includes some satin and lace. Brides were even made to insert some sweet basil leaves in their shoes for good luck. People can also openly express their opinions on the bride’s appearance. Thus, a bride who is not comfortable can return home and work on her appearance. The groom is mostly attired in a “stiff, starched white suit.” 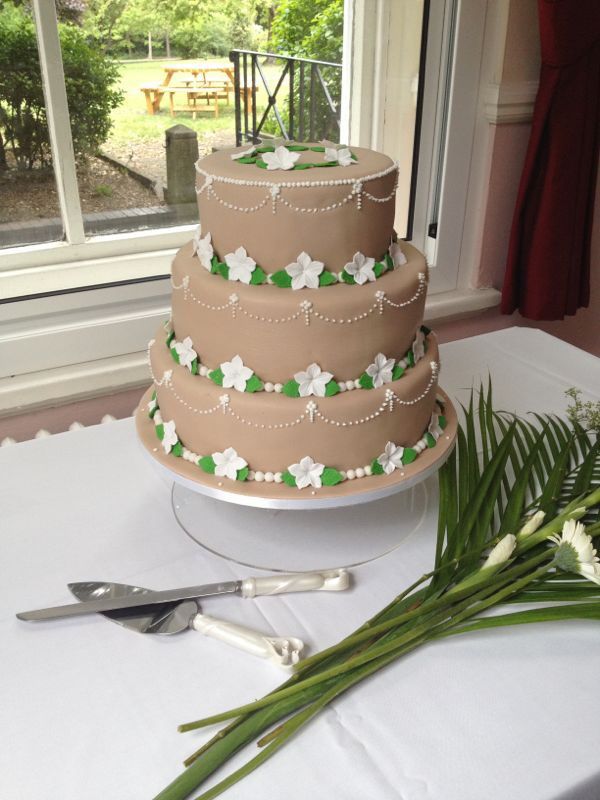 Everyone knows that cake is an important feature of any wedding. In Jamaican culture, they do the extraordinary by starting preparation of the cake immediately the engagement is announced. Usually, the actual baking of the cake is done a week before the wedding day by the bride’s mother or grandmother.

And this cake is not like your everyday cake. Full of spices such as nutmeg and cinnamon, including dried fruits, the cake is soaked for weeks in rum – a staple of the Caribbean – for moisture and flavor. Though Jamaicans make several wedding cakes, the Jamaican Black Rum Cake is what is mostly preferred. 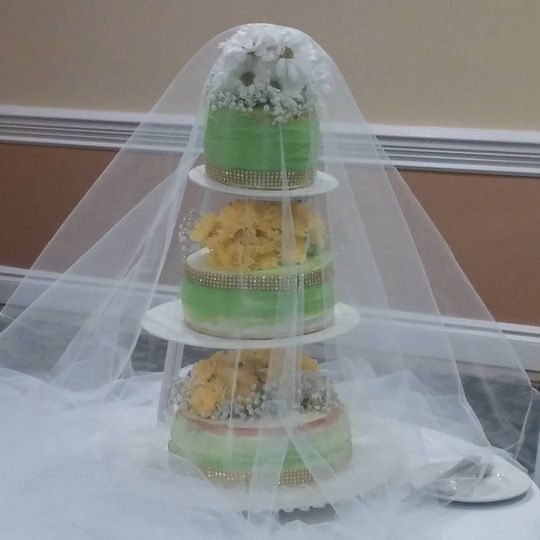 On the day of the wedding, the cake is carried in procession by a group of married women wearing white. People remain silent during this procession while the cake is also covered in white lace or a veil. At the venue of the ceremony, it will remain covered until it’s time for it to be cut. 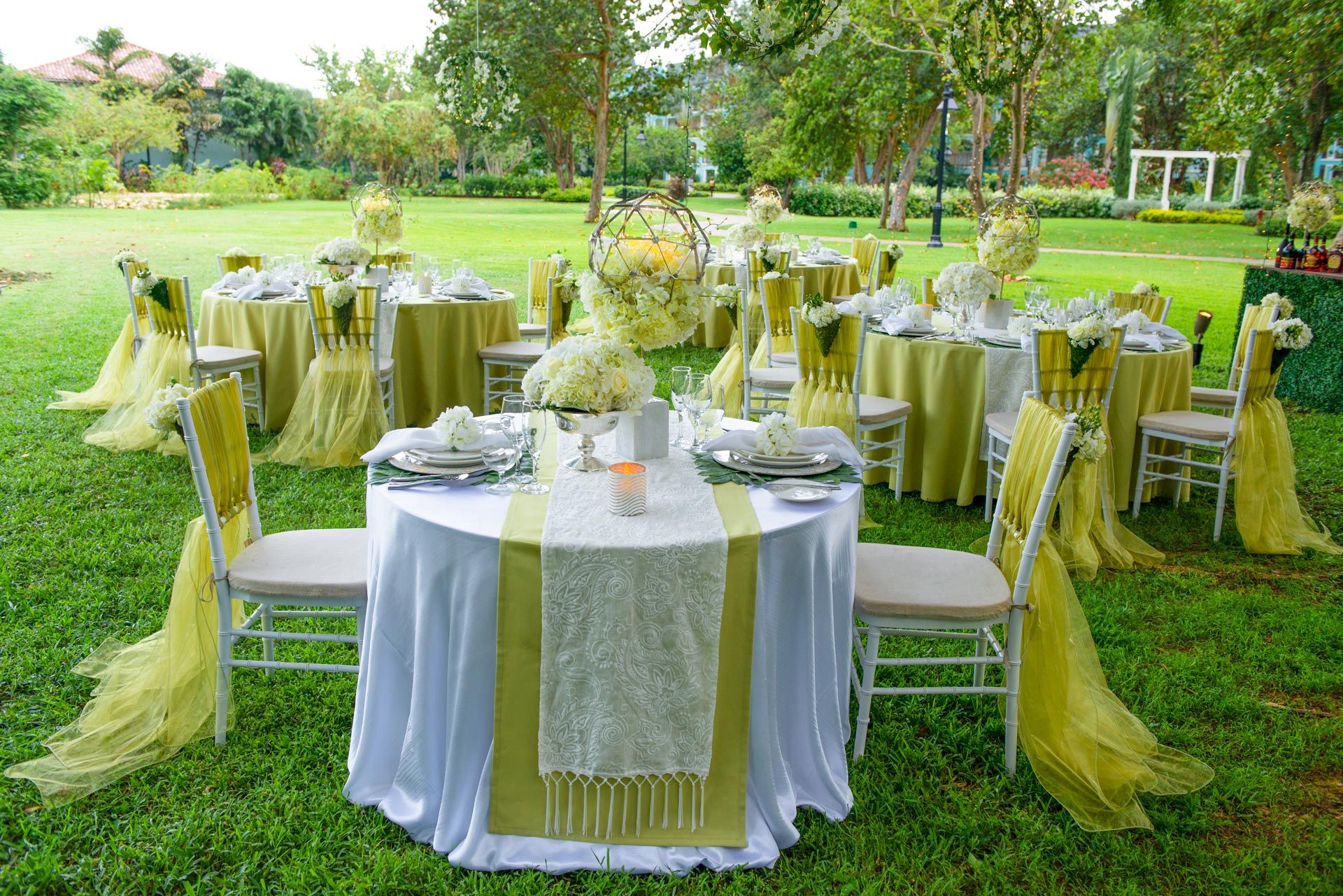 Jamaicans usually perform the actual wedding in a church or chapel and then head to a different venue for the reception. Traditionally, the reception is held in a large tent in the backyard of the groom. The tent, which is made of branches of a coconut tree accompanied by flowers, is built by members of the community, excluding the groom. He can be around to direct the whole process but he is not allowed to work. Note that most Jamaican weddings do not include mail invites as everyone in the community is invited to witness the union and party. 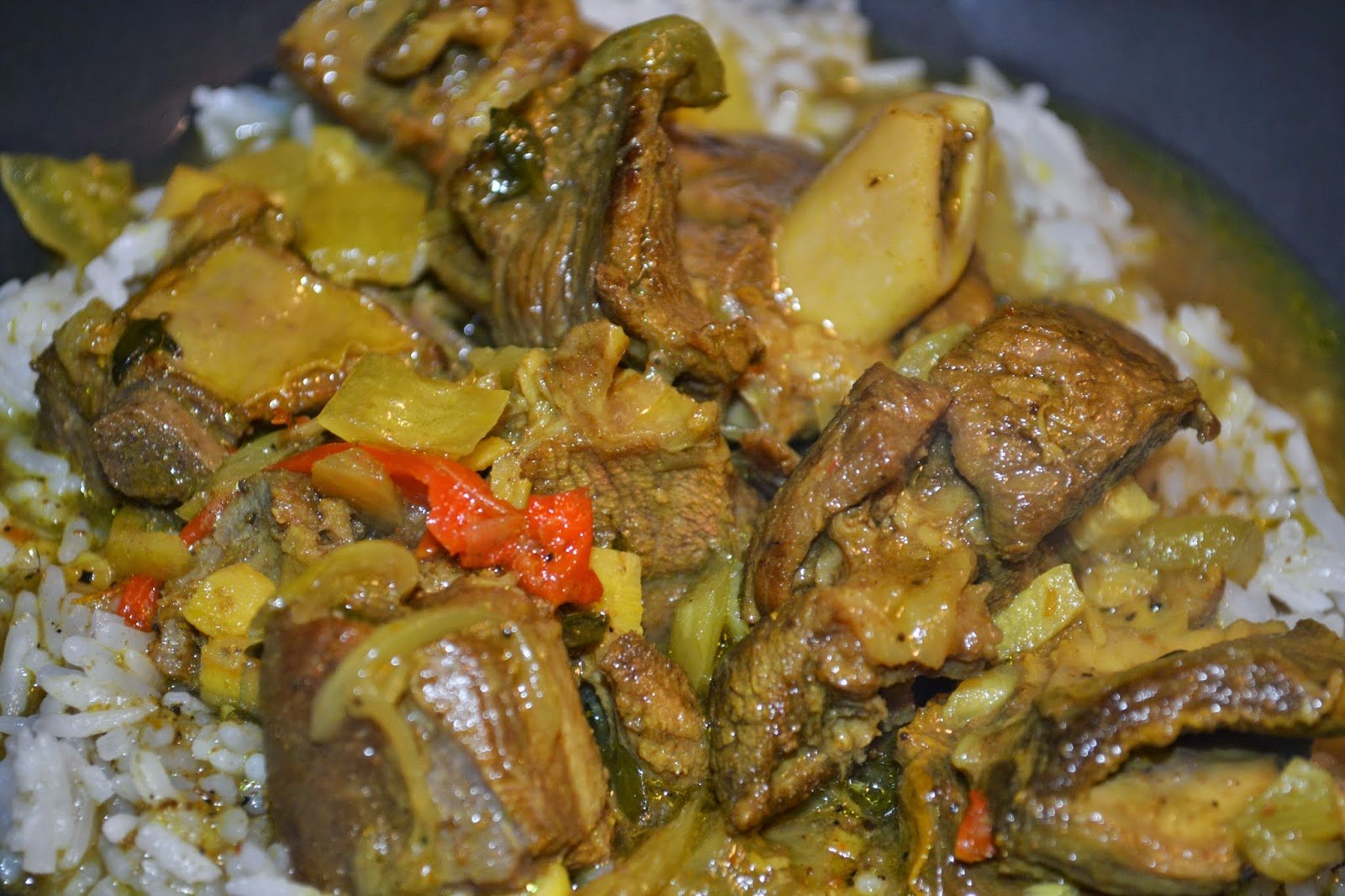 A traditional Jamaican wedding does not end without curried goat and rice. Just as they love rum, Jamaicans can also not do away with their curried goat and rice. The goat is usually chosen by the couple ahead of the wedding. It is then killed to make the curry. The curry is cooked for hours to add more flavor and make it rich. Rum punch, lime, champagne, and wine are also served. 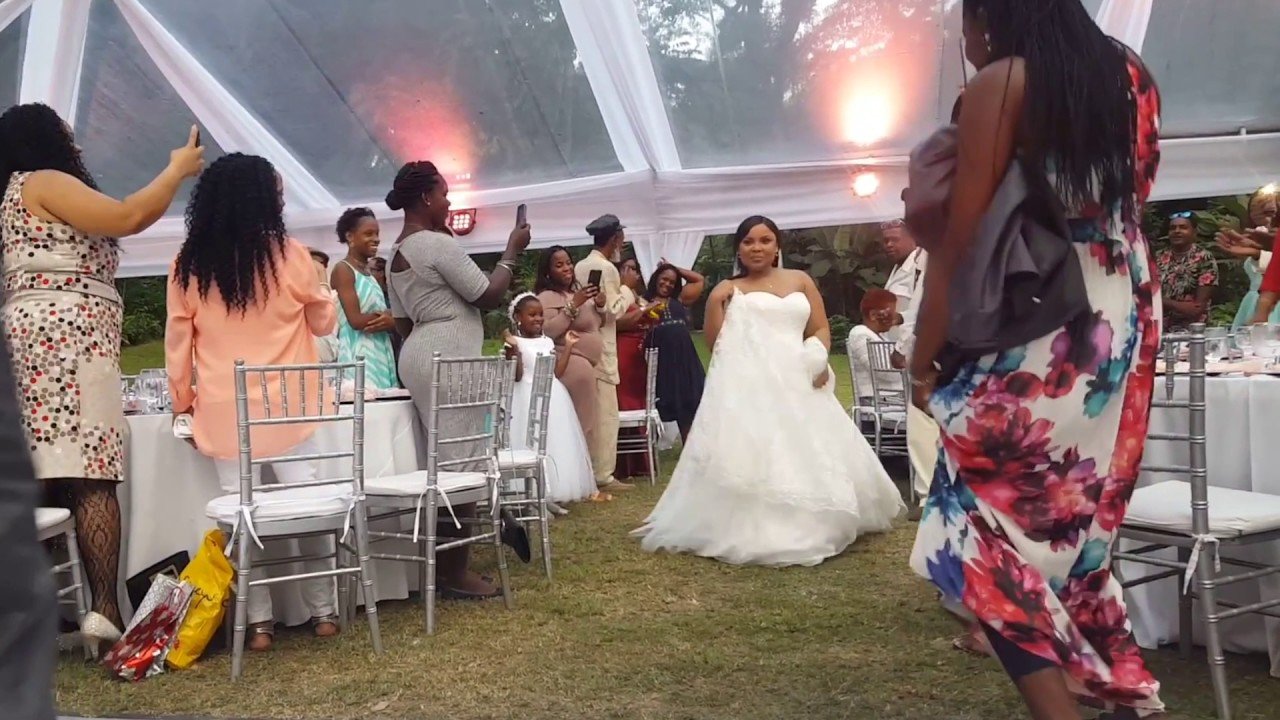 Jamaican wedding receptions, as mentioned earlier, come with open invitations. Guests can party until daybreak but the newlyweds can leave. The aim of the all-night celebrations is to encourage togetherness among family and friends. 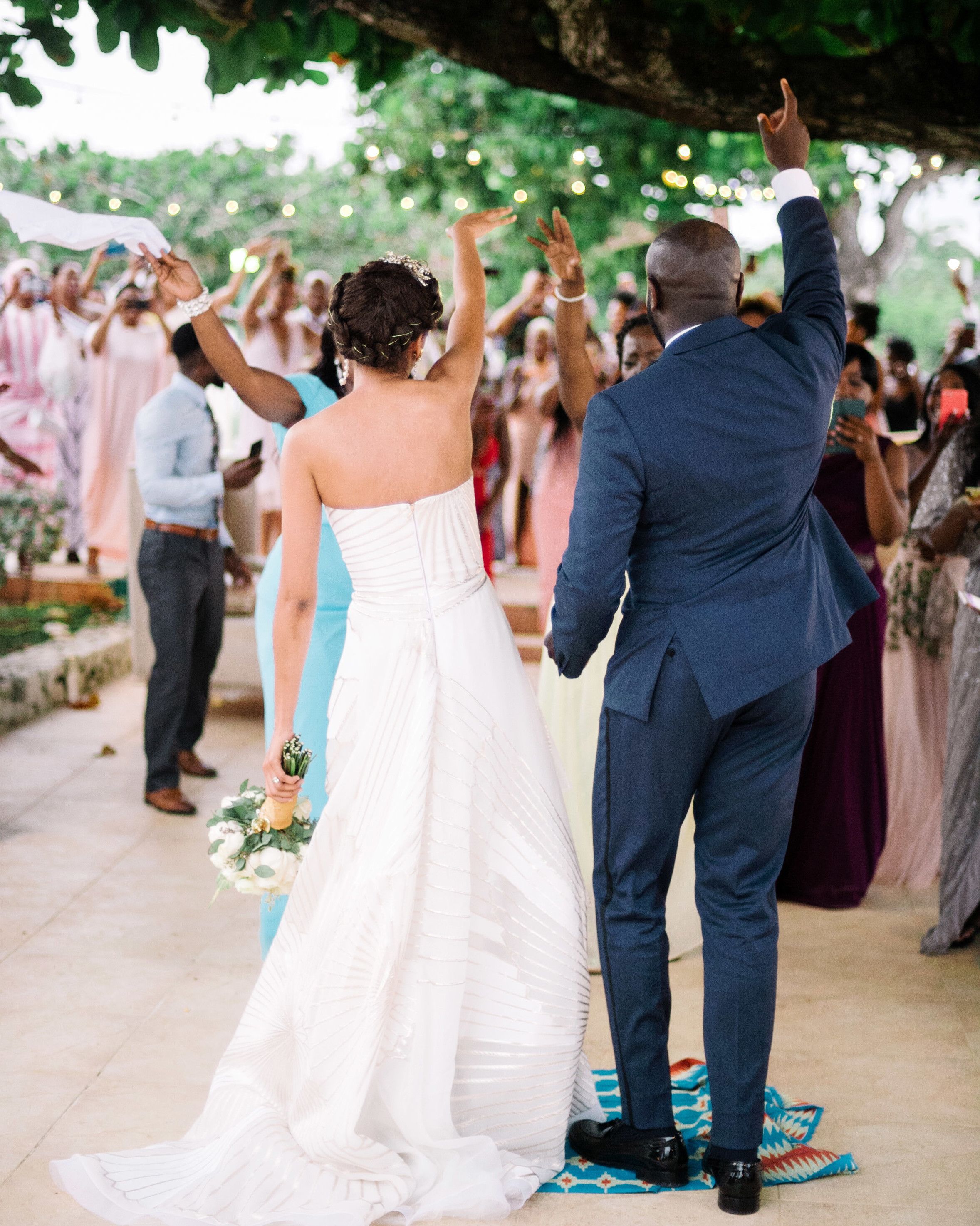 On the Sunday following the wedding, guests are invited to the bride’s home right after church for further festivities. Known as Tun T’anks Sunday (Turn Thanks Sunday), this ceremony can even be bigger than the backyard reception, with lots of food and drinks available.