You may have heard this African proverb which says “a man without a wife is like a vase without flowers.”

Marriage in Africa is seen as more of a rite of passage than a ceremony and marks the union of two families or clans.

Usually, marriages are recognized when there is the exchange of bridewealth in the form of cattle for some ethnic groups.

Among the Nuer ethnic group, however, having a child is more crucial to the marriage ceremony than even the bridewealth.

Thus, for the Nuer, who are mostly found in South Sudan, with others in southwestern Ethiopia, marriage proceedings are not complete until the woman is able to deliver at least two children. 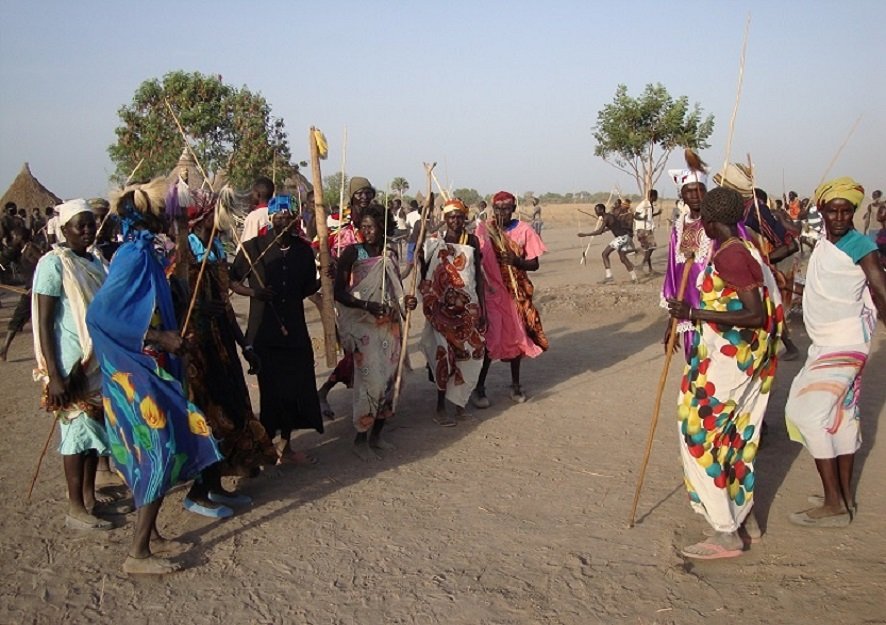 Traditional marriage among the Nuer of South Sudan. Photo: segretariato-evangelizzazione-mccj.over-blog.com

In other words, once a third child is born of the union, the marriage is officially tied. The woman has become a full member of her husband’s agnatic lineage, along with her children, writes everyculture.com.

The Nuer people, one of the largest ethnic groups in southern Sudan, are pastoralists who herd cattle for a living, even though others go into horticulture, especially when their cattle are threatened by disease.

With their lives revolving around cattle, the livestock have become very important in their role as bridewealth, where the man hands them over – about 20 to 40 to the woman’s lineage.

Sources say this “exchange of cattle ensures that the children will be considered to belong to the husband’s lineage. “

With their belief in continuity and kinship, having children is deemed necessary for those who marry. Thus, the more a wife can produce for her husband, the more respect she garners as a role player in clan continuity.

Generally, marriage, a home, and children are the goal in the life of every Nuer.

“After puberty, boys and girls have a good deal of freedom in experimental love-making and usually find their lovers without any particular interference from their respective families, but marriage is the purpose behind every romance. In the final choice, the girl’s family must approve of the suitor’s family. They should be steady, agreeable people with a sufficiency of cattle,” writes laulima.hawaii.edu.

Among the Nuer, the marriage process involves four steps. The first is the betrothal, where the groom’s family makes a token gift of a few cattle. A date is then set for the second ceremony, which is the wedding. Here, the marriage feast is held at the girl’s home in the presence of relatives of both families.

The third stage is consummation, where a third feast is held but at the home of the groom. Celebrating the final binding of the union of families, this stage enables the husband to have full conjugal rights over his wife.

The couple will, however, not live together until a child is born. The woman gets a special hut in her family’s home, and the man visits her overnight.

With a marriage not stable until a child is born, the couple and relatives, at this stage, will be anxious for a child. A marriage becomes void if no children are born within a certain time.

Other accounts state that if the wife is able to produce only one child after a given time frame, the husband may ask for a divorce.

The conditions of the divorce are for the groom to either get cattle from the bride’s family or custody of the child.